Thinking of gritting your own premises?

What’s the difference between white and Brown salt?

White Salt as it is known is normally pure salt with nothing else mixed into it. Normally this is exported from countries such as Egypt. Some gritting companies prefer to use white salt as it is promoted as leaving less residue or staining. Brown salt or grit as it often called is sourced from mines within the UK so is cheaper to purchase and has less environmental impact in sourcing. Brown salt often has other particles mixed in with it such as small amounts of sand to aid grip on icy surfaces.

When is the best time to put grit down?

Ideally grit needs to be put down several hours before you think ice will form. This gives time for road and foot traffic to travel over the grit breaking it down and helping turn it into a brine solution which prevents ice from forming. If a surface is already icy when grit is spread it will take a while to have any effect. This is speed up by traffic using the area and breaking the grit down. The finer the grit/salt particles being spread the quicker it works. Brown salt or road grit can benefit from having particles such as sand mixed in with it which provides an instant grip effect on icy surfaces.

Will grit stop snow from settling?

Grit will only stop small amounts of snow from settling. ‘It’s not fairy dust’ is probably the most commonly used phrase by snow ploughing contractors when it does snow. Any snow which settles to height of 3cm or more is best pushed or ploughed to one side first then grit being spread over the cleared area. When shovelling or snow ploughing try and build it up where the surface is at its lowest or near good drainage areas. Often you will see piles of snow melting during the day with the water runoff then freezing over at night when temperatures drop. Most effective gritting companies will produce a ploughing plan at the start of winter and allow for this where possible. 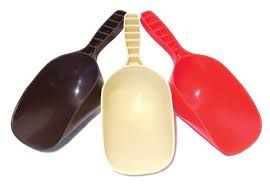 What do you use when spreading grit by hand?

If you have to spread grit by hand yourself then scoops (as pictured) normally used for pet food are ideal. Made of plastic and relatively cheap they don’t rust so will last longer than metal versions. All of our gritters use these for gritting pathways and areas not accessible to our gritting vehicles. If you have larger areas to cover then consider investing in a walk behind spreader but look at professional brands such as Snowex as they will last longer when well maintained.

The grit in our grit bin is solid?

When grit gets damp it will bind together over time which makes it near impossible to spread evenly. If you are responsible for keeping a grit bin topped up try and buy salt in the smallest bags possible and reject any which have holes in. Only open one bag at a time leaving them sealed in their bags inside the grit bin if not used.